Allow me to introduce you to one of, if not the, wildest car I’ve ever seen. This rolling work of art is Myron Tolf’s 1933 Chevy 2 door sedan rat rod. It took Myron only four months to build from a 1933 chevy body and the original frame rails. The entire car is bespoke, hand built by Myron himself. Its impressive the second you see it but then you look closer and all the little touches begin to emerge. Things like the hand pin striping, or the vintage Quaker State Oil bottle that acts as the radiator over flow. To give it its low slung look Myron chopped 4 inches from the rear, 6 inches from the front, and 10 inches from the center. At first glance the car looks almost undrivable, but that’s part of its beauty.

Every part of this car is vintage from the 1965 Buick 45 fin brake drums with 1940 Ford backing plates, 1960’s Hunter Mag. The engine Myron chose is an absolute monster, a 502 big block that makes in his words, somewhere between 650 and 750hp. To get into the car Myron equipped the car with two hydraulic rams to lift the body in one of the most creative solutions I’ve ever seen. The floorpan is 1/4″ steel welded beneath the frame and the drag seats are welded directly to the frame and immovable, so you better like the driving position. Enough from me, I’ll let the photos do the rest of the talking. 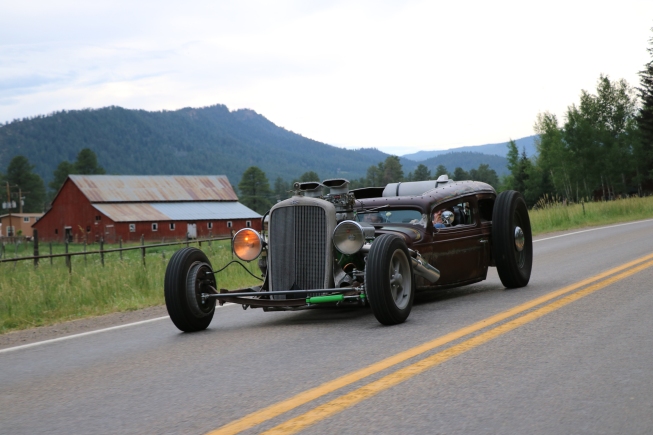